For much of his graduate work at the National Institutes of Health (NIH) in Building 4, Dr. Samuel Katz had a poem by Max Ritvo posted above his desk. It was not only posted because of his love for poetry and the work of poets but because of the knowledge poetry invoked. That Ritvo poem was about the promise and hope of big data and medicine, which is the driving force behind Sam’s research and aspirations.

Dr. Katz shares with you his story today. 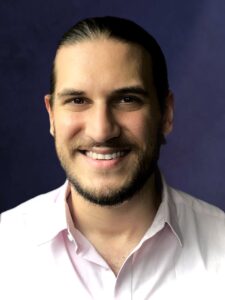 I started my Ph.D. with a simple hope, I wanted to use the methods learned during my time at the Berlin Institute for Medical Systems Biology to better understand the immune system. This approach differed from the traditional methods I was taught during my undergraduate science experiences. What I was first taught was that science starts with a hypothesis, you then test the hypothesis, and lastly evaluate. In systems biology, I learned a different way of doing science. I learned how you can use big scientific experiments to guide you and tell you where to look. This approach, sometimes called Data Driven Hypothesis, has its critics but to me, it was the most exciting way of doing science. Remove your biases, characterize the system, and let it tell you how it works instead of the other way around.

This reminded me of what the great American theatre acting teacher Stella Adler once said. At that time “Method Acting” was all the rage, actors were taught to look into their own experiences to bring to the stage the feelings of their characters in the play. Adler was a great critic of “the Method” and she would tell her students don’t make Troy from August Wilson’s Fences feel what you are feeling, makes yourself feel what he is feeling; don’t bring Othello down to your level, bring your level up to Othello’s. “In our theatre, the actors often don’t raise themselves to the level of the characters. They bring the great characters down to their level.” (Source: Stella Adler the Art of Acting, Stella Adler, On America’s Master Playwrights).

I felt that science was going through the same thing. Biologists were discovering how to not just bring our scientific experiments down to the understandings we can form but how to bring our scientific understanding to what large-scale experiments were telling us. I wanted to be involved in this project. I dedicated my Ph.D. working to create ways in which scientists could use these large experiments that are done with fewer prior biases and interpret their results so that new hypotheses could be formed and tested.

This approach continues to have its critics. Some people call these experiments “fishing expeditions” – where you’re just looking to find something without any idea of what and why. But to me, it is the humblest way to pursue science and the one that is likely to give us the biggest leaps in our understanding of health and disease.

This work isn’t easy. Scientists who work with big data have to contend with issues that only emerge when you operate at that scale. Data gets nosier the bigger it gets, and the more you process your data the more you impose your own biases on it. And sometimes, after the endless hours, of staring at large datasets of gene IDs and numbers you can forget that this actually connects to the most valuable and delicate thing we have – life. When those moments would hit me during late nights in the lab, I would look above my desk and see a poem posted up there.

The poem is by the poet Max Ritvo who was born the same year as me. At age 16, he was diagnosed with Ewing’s Sarcoma. Ritvo wrote beautifully about his disease, time, and the emotions he was feeling, including one – the beautiful poem I chose to put above my desk, titled: Poem to My Litter.

Ritvo’s poem is a message to the mice being used to screen for different drugs that his cancer might respond to. The mice were given Ritvo’s cancer and each one was treated with a different drug. Like the screens I was working on, this work was driven less by hypothesis and more by the hope of us finding something that even our best hypothesis can’t reach yet.

The poem begins by describing this.

My genes are in mice, and not in the banal way

that Man’s old genes are in the Beasts.

My doctors split my tumors up and scattered them

into the bones of twelve mice. We give

the mice poisons I might, in the future, want

for myself. We watch each mouse like a crystal ball.

Ritvo also captured the way in which these experiments are never perfect. We use model organisms and sometimes study disease in a test tube and explore cures on plastic plates.

I wish it was perfect, but sometimes the death we see

doesn’t happen when we try it again in my body.

My tumors are old, older than mice can be.

Reading and re-reading Ritvo’s poem, I would be reminded of the human story behind the diseases I was studying. Most biologists know the famous “Hallmarks of Cancer” from reading the landmark paper published in 2000, by Drs. Douglas Hanahan and Robert Weinberg. Ritvo understood these hallmarks from his own body.

They first grew in my flank, a decade ago.

Then they went to my lungs, and down my femurs,

and into the hives in my throat that hatch white cells.

The mice only have a tumor each, in the leg.

Their tumors have never grown up. Uprooted

and moved. Learned to sleep in any bed

the vast body turns down.

Experiments are never a perfect representation of what we are trying to understand, compromises, and adaptations are made, and we hope that what we are studying resembles enough the thing we want to change.

Before the tumors can spread,

they bust open the legs of the mice. Who bleed to death

Next time the doctors plan to cut off the legs

in the nick of time so the tumors will spread.

But I still have both my legs. To complicate things further,

mouse bodies fight off my tumors. We have to give

the mice AIDS so they’ll harbor my genes.

Ritvo shows us in this poem, both, the incredible human pain of a disease like cancer and the simultaneous human power to find laughter and comedy even in the darkest corridors of life.

I want my mice to be just like me. I don’t have any children.

but now they’re all just Max. No playing favorites.

and tortured so they won’t let you visit.

Then at the end, Ritvo shows us the terrible pain of his disease and the beautiful way in which our bodies are these fragile vessels of life. When it all works, we don’t even know the peace it’s giving us.

I hope, Maxes, some good in you is of me.

Even my suffering is good, in part. Sure, I swell

with rage, fear—the stuff that makes you see your tail

as a bar on the cage. But then the feelings pass.

And since I do absolutely nothing (my pride, like my fur,

all gone) nothing happens to me. And if a whole lot

of nothing happens to you, Maxes, that’s peace.

Which is what we want. Trust me. 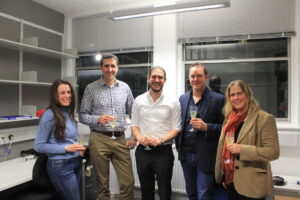 I would get to the end of this poem and always reflect on the beautiful irony of science it captures. In science, we want to find big things that change and discover ways that something behaves differently and why. We do all this so that the body can live in quiet peace, for a little longer, for a little better.

Ritvo died from his disease before the mice were able to give him peace. I wasn’t even done with my first year of graduate school when I learned of his passing. He was 26 years old, the same age I was.

I go back to his poem often not just because it reminds me of what this work is all about but because it shows me that these deep new vistas we are exploring with our screens, with our gigantic datasets, this isn’t just for the wow factor. It is so that nothing happens to people like Max Ritvo, and all the Maxes he named.

You also can hear the poet read the poem here with beautiful animation added: https://www.youtube.com/watch?v=NGr44gjkoxc