NIH Oxford-Cambridge (OxCam) Alumna Erin Coonahan completed her DPhil research at the National Institute for Allergy and Infectious Diseases (NIAID), the University of Oxford, and the Mahidol Oxford Tropical Medicine Research Unit (MORU) in 2019. Her research, focused on the development of an aptamer-based sensor for the detection of antimalarial drugs, is now published in Science Translational Medicine. The sensor provided a rapid and affordable method for researchers in malaria endemic countries to collect data on antimalarial tablet quality and drug use practices – both major factors contributing to the emergence and spread of drug resistant malaria. 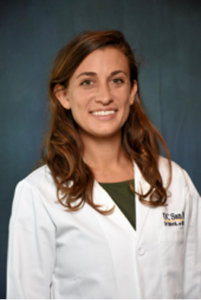 “During my PhD, I learned new techniques and scientific approaches from various mentors and peers and I learned from new environments, working in different laboratories and cultures on 3 different continents. Upon completion of my PhD, I packed my car in my hometown in Maine and drove across the country to San Diego to begin medical school. I feel very lucky that my MD/PhD training has taken me across the world, and the country, and introduced me to wonderful people and lifelong friends,” stated Dr. Coonahan.

Currently, Dr. Coonahan is starting her 3rd year of medical school at the UC San Diego School of Medicine via the OxCam Track 3 Program. This Program allows students to apply for medical school funding via the Medical Scientist Training Program (MSTP) during their final years of doctoral research. The Program provides an important path for students, like Dr. Coonahan, who are motivated to pursue clinical training following their doctoral research experiences. She began graduate research with the goal of gaining technical skills in diagnostic and sensor development and along the way became aware of the many challenges at the intersection of technology and clinical solutions. Too often, a promising new technology in the medical field fails to be implemented due to unforeseen logistical barriers in the clinic or a lack of clinical need. In her future role as a physician-scientist, Dr. Coonahan hopes her training will allow her to leverage both clinical insight and sensor technology to identify, develop, and implement new diagnostic tools.