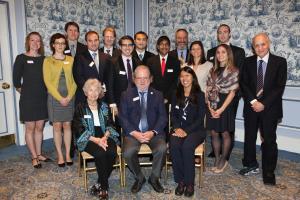 Have you heard of “America’s Nobels”? The Lasker Awards, often referred to as “America’s Nobels,” have been awarded annually since 1945 to living persons who have made major contributions to medical science or who have performed extraordinary public service on behalf of medicine. They are administered by the Albert and Mary Lasker Foundation, based in New York City and founded by Mary Woodard Lasker and her husband, Albert Lasker. As an activist and philanthropist, Mary Lasker played a major role in promoting and expanding the National Institutes of Health in Bethesda, Maryland – where our NIH Oxford-Cambridge Scholars train in the United States.

The Lasker Award is the nation’s most distinguished honor for basic and clinical research.  As its nickname indicates, the Award is often a precursor to other distinguished prizes, such as the Nobel. The Lasker Awards gained a reputation for identifying future winners of the Nobel Prize and for a good reason. Eighty-seven Lasker laureates have received the Nobel Prize, including thirty-three in the last two decades. Well now that number is eighty-eight because Dr. James P. Allison, the 2015 Lasker~DeBakey Clinical Medical Research Award winner, was just awarded the 2018 Nobel Prize in Physiology or Medicine. What is even more fascinating is that the NIH Oxford-Cambridge/Wellcome Trust (WT) scholars have the opportunity to attend these prestigious awards and converse with laureates. In fact, a group of students did just that in 2015 and met Dr. James Allison, Dr. Evelyn M. Witkin, Dr. Stephen J. Elledge, and representatives from Médecins Sans Frontières (Doctors Without Borders).  Present were NIH OxCam alumni Joshua Bernstock, Alice Easton, Ian Goldlust, Michael Gormally, Angela Ianni and Sarah Watters.

The Alliance congratulates Dr. James Allison and all winners of the 2018 Nobel Prize. We are watching and waiting for this pattern to continue and look forward to the day when we can witness one of our NIH OxCam scholars holding a Lasker Award in their own hands.