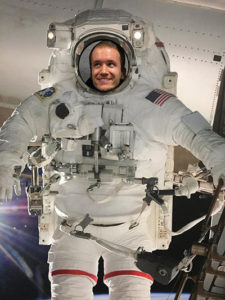 To infinity and beyond!  It’s not such far out concept as Scholars learned on a recent career development field trip to NASA’s Goddard Space Flight Center in Greenbelt, Maryland.   Established in 1959 and named for American rocketry pioneer Dr. Robert H. Goddard, it is home to the nation’s largest organization of scientists, engineers, and technologists who build spacecraft, instruments, and new technology to study Earth, the sun, our solar system, and the universe.  Goddard is home to Hubble operations and the upcoming James Webb Space Telescope. Goddard manages communications between mission control and orbiting astronauts aboard the International Space Station. Goddard scientists stare into the sun, grind up meteorites for signs of life’s building blocks, consider the farthest reaches of space, and untangle the mysteries of our changing world.

The Goddard visit was focused on astrobiology (one of the many topics of science that NASA researches). Astrobiology is the study of the origins and evolution of life in the universe and on Earth. Astrobiology addresses whether life exists outside Earth and how we can detect signs of life in other areas of the universe. This field employs many of the scientific techniques that traditional biologists (like those at the NIH) use to understand the chemistry and evolution of life, but it also employs techniques developed to study the universe such as those used in astronomy, astrophysics, and aerospace engineering. For example, one of the NASA missions presented to the Scholars during their visit was OSIRIS-Rex, which involved using a satellite to intercept an asteroid and return a sample to Earth. Scientists believe that some of the precursor molecules important to life on Earth may have had origins in space. The researchers at NASA Goddard wanted to sample compounds from the asteroid to see if such molecules could be found on it.

Scholar Lindsey Rosen shared that astrobiology is more physics and analytical chemistry than it is biology: “Their aim is to study specimens retrieved from meteorites and asteroids for organic and inorganic compounds, thus determining if such environments are suitable for life (single-celled organisms and such). We also heard from folks who design instruments that are sent to Mars or used for meteorite/asteroid specimen collection. Such instruments are the result of international collaborations where many different institutions around the world contribute various devices.”

For many of the Scholars, space exploration has been an inspiring area of science from the time they were children. The fundamental questions that NASA seeks to answer are important to all of us: How did the universe form? Are there other life forms out there? Additionally, the advanced and diverse technology that NASA uses in its research is exciting and fascinating.

Scholar Keval Patel noted that “personally, space exploration was one of the main reasons for my pursuit of an engineering and science education. My lifelong dream is to travel to space and perform science that pushes the limits of human space exploration.”