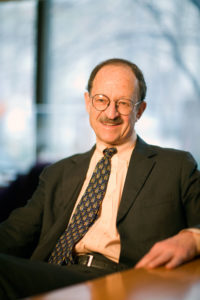 The International Biomedical Research Alliance, a non-profit organization which provides programming and funding support for the National Institutes of Health (NIH) Oxford-Cambridge Scholars Program, announced that Harold Varmus, MD, is joining the Alliance’s board of directors. Dr. Varmus, co-recipient of the Nobel Prize in Physiology or Medicine for discovering the cellular origin of retroviral oncogenes, stepped down as director of the National Cancer Institute (NCI) in 2015; previously, he served as president of Memorial Sloan-Kettering Cancer Center and as director of the NIH. He is currently the Lewis Thomas University Professor of Medicine at the Meyer Cancer Center of Weill Cornell Medical College in New York and a senior associate at the New York Genome Center.

“The International Biomedical Research Alliance’s goal is to help train a new generation of top biomedical researchers who are better equipped to investigate human diseases and develop new preventions, treatments, and cures,” said Stephen M. McLean, chairman of the Alliance Board of Directors. “We want to increase the speed at which medical research occurs and also the efficacy of outcomes for patients. We warmly welcome Dr. Varmus to our Board.”

Dr. Varmus has had a long association with the Scholars Program, has met with many of its students, and has said that he is joining the board “to promote the development of the scientific careers of these remarkably talented young people.”

The NIH Oxford-Cambridge Scholars Program was created in 2001, through collaboration between the NIH and Oxford and Cambridge Universities, to revolutionize the way in which the most talented biomedical PhD and MD/PhD students in the United States and the European Union are taught. Participants in the Program receive accelerated training, work on collaborative projects that address critical biomedical research problems, and graduate approximately two years early with a PhD degree from either Oxford or Cambridge University. They spend an equal amount of time with a mentor in a laboratory at either Oxford or Cambridge University and an NIH Intramural Laboratory.

“The NIH Oxford-Cambridge Scholars Program has exceeded our expectations in training the next generation of biomedical researchers and in fostering international research collaborations,” said Michael Gottesman, MD, deputy director of intramural research at the NIH and chief of the Laboratory of Cell Biology at the NCI. “I can think of no one better than Harold Varmus to help the NIH-OxCam Program maintain its hallmark characteristics of intellectual freedom and flexibility that have made the program the success that it is.”

Further information about the NIH Oxford-Cambridge Scholars Program can be found at http://oxcam.gpp.nih.gov.